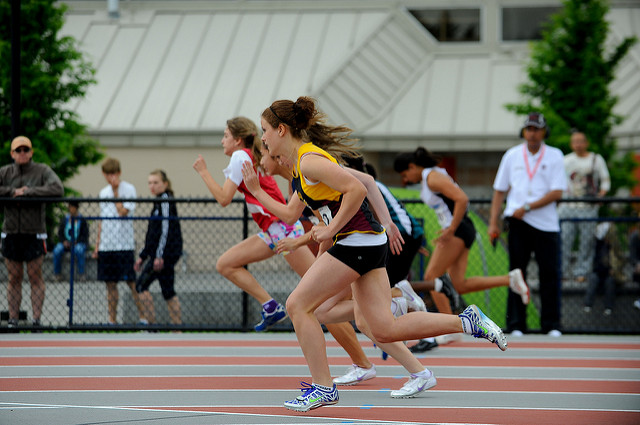 Professor Dweck, Stanford University, has worked with many olympians and world championship teams on how an athlete’s  mindset affects their performance.  In this post I explore why a growth mindset is so important to develop in young athletes.

Many aspiring athletes focus on the result over growing their abilities. If they achieve early success they quickly get labelled as talented or a natural. They come to believe that natural ability is the key to success.  I know this story personally through my experience with my daughter and son when they were younger athletes.

As a youngster my son was a terrific middle distance runner. He won every event he entered. He was a graceful winner and other kids looked at him with envy.

He came to believe that winning came naturally to him. He didn’t train that hard, yet he was still able to complete and win – for a while…  After a couple seasons he found that he was no longer the fastest runner and his results started to decline. He began to doubt his ability and couldn’t accept that he needed to train hard to be a good runner. His early success (in part) lead him to develop a fixed mindset – the belief that his abilities and intelligence were static. He believed that if he had to work hard at running it meant he wasn’t any good at it.

He eventually quit athletics believing he didn’t have the ability to compete and win.

My daughter on the other hand had a very different experience as a young athlete. She was keen to join the squad I coached and start train with the other athletes. In her first race she finished 23rd in a field of 24 runners. Meanwhile, her younger brother easily won his race later that day.

I sat down with her that afternoon and we talked about what it would take to improve. That she would need to train hard, practice her technique and develop better race tactics.  It’s fair to say that when she started she didn’t have a single strong point. She wasn’t fit. Her stride was poor.  And she thought if she didn’t lead the race out she couldn’t win.

Over the next few seasons she trained harder than most kids in the squad and her times slowly improved. She asked me for extra training sessions and although some of those ended in tears, she would turn up for the next session ready to go. At the end of her second season she made the State Championships for the 1500 meter event for her age group. In a field of 16 she finished 15th.

I said to her, look how far you’ve come this year. Last year she wasn’t even close to qualifying for the championships. We set a goal to finish in the top 10 next year. She finished 5th. “Okay, now let’s get to the podium next year” we said. She trained harder than ever and suddenly her form was nearly faultless. Parents started saying “Wow, what a natural athlete your daughter is!”

The State Championships rolled around for another season. She changed to  the 400 meter event as her speed improved. She qualified through to the finals with the third fastest time. She was equal parts nervous and excited at the prospect of placing in the top three. She won the final in a race that capped off four year’s of hard work and practice to become the State Champion.

As a father and a coach I look at my son and my daughter and think her early struggles were a gift. She learnt that success isn’t attained easily, but its the result of hard work and diligent practice. Through her experience she developed a growth mindset as an athlete. She believed that her ability could be developed and that she could improve. She didn’t finish that first season thinking she would become a State Champion, but she believed she could get faster and stronger. Without that belief she wouldn’t have become the athlete she is today.

Everyone’s journey toward a growth mindset is unique. We are all a mixture of both fixed and growth. Together we can help you build a more persistent growth mindset